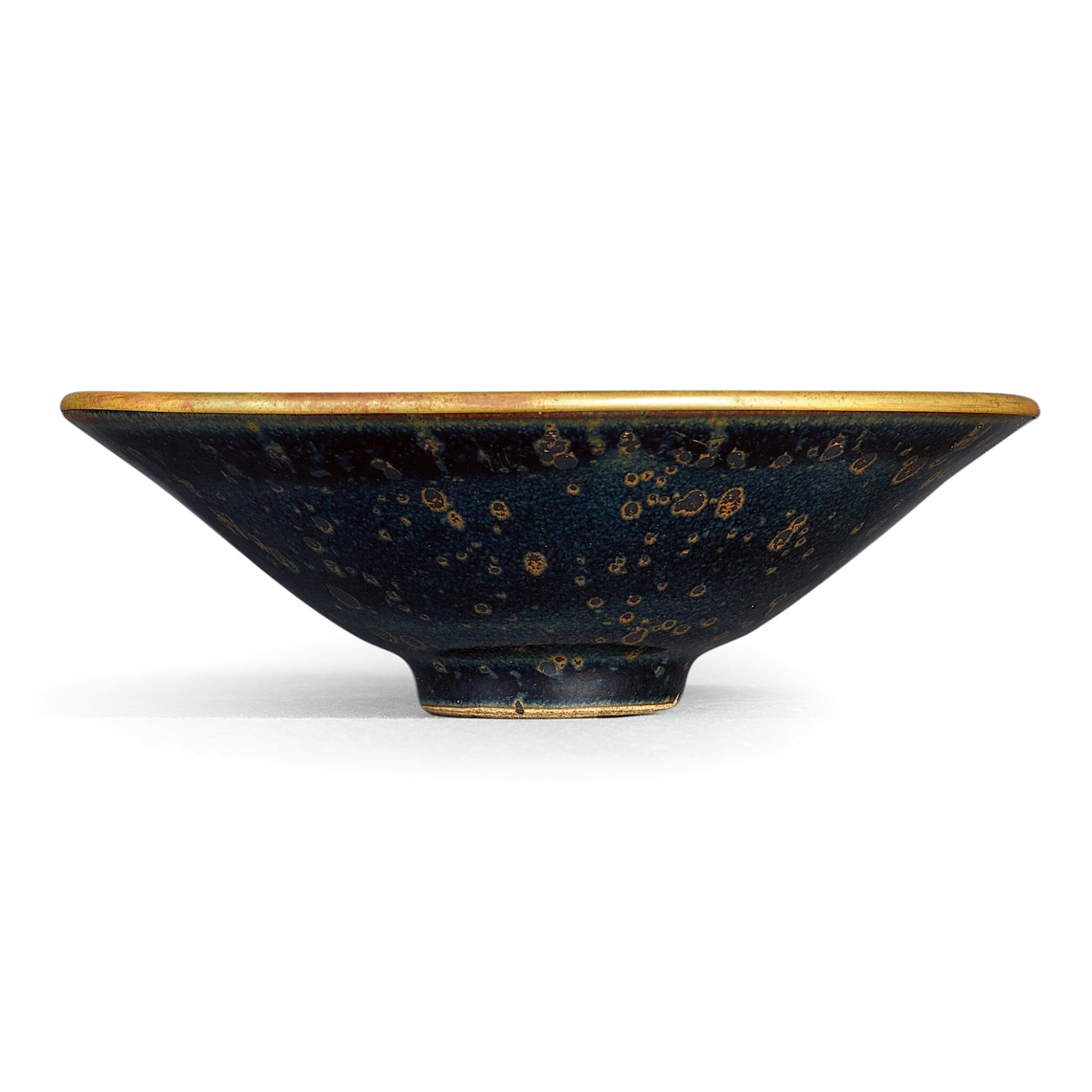 Please note your bid limit has been reached. Please reach out to the Bids Department for further information at +852 2822 8142 or bids.hongkong@sothebys.com

Property from the Aoyama Studio Collection

with steep sides resting on a short foot, covered overall with a lustrous black glaze stopping neatly along the unglazed footring to reveal the pale buff stoneware body, the glaze further decorated with irregular silvery-russet speckles, the rim mounted with a metal band

The bowl is in good condition with light surface scratches to the interior and shallow chips to the foot with associated losses to the glaze pools. The bowl has not been examined under the metal band.

In response to your inquiry, we are pleased to provide you with a general report of the condition of the property described above. Since we are not professional conservators or restorers, we urge you to consult with a restorer or conservator of your choice who will be better able to provide a detailed, professional report. Prospective buyers should inspect each lot to satisfy themselves as to condition and must understand that any statement made by Sotheby's is merely a subjective, qualified opinion. Prospective buyers should also refer to any Important Notices regarding this sale, which are printed in the Sale Catalogue.

NOTWITHSTANDING THIS REPORT OR ANY DISCUSSIONS CONCERNING A LOT, ALL LOTS ARE OFFERED AND SOLD

AS IS" IN ACCORDANCE WITH THE CONDITIONS OF BUSINESS PRINTED IN THE SALE CATALOGUE.

Elegantly potted with wide flaring sides and a short foot, this bowl is special for its attractive silver speckles that enhance the rich dark-brown glaze. Its buff-coloured body visible at the foot, suggests it was produced at one of the many Cizhou-type kilns that produced black-glazed wares in the Northern Song dynasty. Archaeological excavations at one such kiln complex, the Dangyangyu kilns in Xiuwu, Henan province, have unearthed black-glazed wares with similar features: from the thick footring and the glazed interior of the foot, to the uneven application of the speckles on the glaze. See for example a reconstructed bowl of this form but larger size, and with russet speckles, recovered at Xiuwu, illustrated in Series of China’s Ancient Porcelain Kiln Sites. Dangyangyu Kiln of China, Beijing, 2011, pl. 59.

Bowls of this form covered in this dark-brown glaze and with silver speckles are very rare and no other closely related examples appear to have been published, although a bowl with silver speckles is offered in this sale, lot 28, and a pair of conical bowls with large silvery splashes, in the Arthur M. Sackler Museum, Harvard University Art Museums, was included in the Museum’s exhibition Hare’s Fur, Tortoiseshell and Partridge Feathers. Chinese Brown- and Black-Glazes Ceramics, 400-1400, Cambridge, 1995, cat. no. 45a and b.